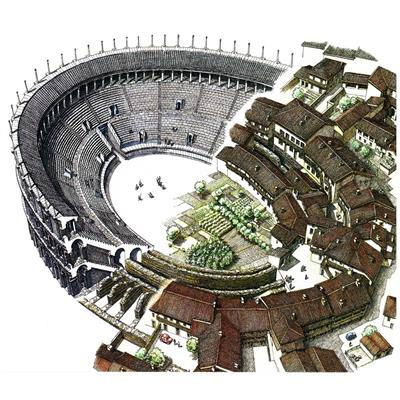 The amphitheatre is the most famous monument in Pollentia. On its ruins a village of rustic houses with a typical elliptical shape and the evocative name of Coliseum or Coliseo was built, which preserves  the perimeter of the arena in the courtyards with gardens and vegetable gardens and in the cellars the remains of ancient walls. It represents an interesting phenomenon of reuse of this type of building for shows that is compared to Lucca, in the medieval market square, and Venafro (Isernia, Molise), in the so-called Verlascio. It stood outside the urban perimeter, near burials pertinent to the northern necropolis, and was flanked by the stretch of decumanus maximum leaving the city (currentlyt via Regina Margherita).
Built in the second half of the first century A.D. it was used until at least  the last decades of the fourth century A.D., it had remarkable dimensions; the cavea, could accommodate beyond 10.000 spectators, measured m 132 x 98. The plan was structured in four rings, made up of powerful walls, and separated by a vaulted corridor (praecinctio), partly corresponding to the current Via Colosseo. They supported the two sectors (Maeniani) with tiers for spectators. The outer one (12 m wide), corresponding to the summa cavea, was supported by a complex system of rooms covered by barrel vaults, which partly correspond to the cellars of modern houses, while others are still buried. The lower sector of the amphitheatre (ima cavea) was  9 m wide, lay on an artificially embankment in which rooms  with vaulted roofs, were built, probably at the entrances to the arena, never before investigated.