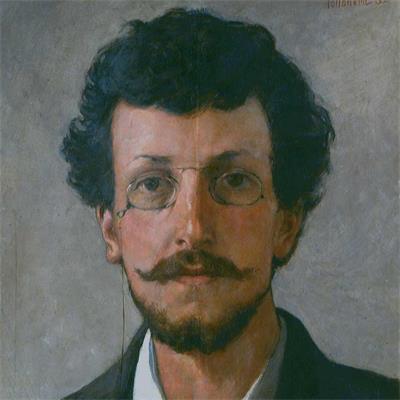 Giovanni Piumati (Bra/CN, 1850 - Col San Giovanni/TO, 1915) attended the Royal Albertina Academy of Fine Arts in Turin, where he was a student, among others, of Fontanesi’s landscape painting; he also graduated  in Law, then in Arts and Philosophy. He participated with his works in the exhibitions of the Società Promotrice delle Belle Arti and the Circolo degli artisti of Turin; he was also an art critic for the newspaper "Gazzetta Piemontese".
In 1888 at the University of Bonn, where he was teaching, he met the student Fëdor Sabashnikov, a wealthy Russian, who became his friend and patron in the research and study of the manuscripts of Leonardo da Vinci. The decades-long diplomatic and critical transcription led to the publication of the Codex Atlanticus, On the Flight of Birds and Various Other Subjects, and On Anatomy, Sheets A and B.;  specimens of the original editions are displayed  in the showcases inside the room of the museum dedicated to him.
The room also displays a small group of his works, among the few which are not part  of  private collections, received at different times by the museum; at the time of its establishment his wife Eugenia Glück and daughter Sandra donated the painting Fog on the mountain. Later on Sandra handed over  Annibale’s Bridge . Piedmont Alps and two portraits of his father: tempera on panel by Carlo Pollonera and oil on cardboard by Giovanni Guarlotti.
The plaster bust, a preparatory sketch of that of bronze, is a later made by Nillo Beltrami, it  was placed in 1952 in the council room of the Town Hall.
Hut among the trees oil on canvas, was purchased in 1981, and in 2003 three other landscapes, including the Fountain in the garden, were added to the museum. A series of drawings were granted in deposit by the heirs Leumann-Piumati in 1997.
On the centenary of his death (2015), an exhibition at Palazzo Mathis curated by the Museum of Palazzo Traversa paid due tribute to this multifaceted artist and intellectual of European stature